Posted on February 21, 2013 by chase
Scitzo was first diagnosed with lymphoma and started chemotherapy 2/13/08. She has been in remission since the first 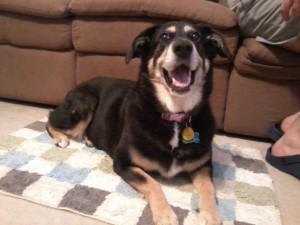 treatment – 5 YEARS!  Her onset was different than the “normal” symptoms, hers presented with a red eye for a few weeks before the appearance of enlarged lymph nodes. When the lymph nodes appeared, they were the submandibular nodes.
Scitzo had 6 months of the Madison Wisconsin protocol and has not had any maintenance chemo. She suffered a lot of side effects from the chemo and some were pretty strange.  A few examples are, she acquired a taste for clothing and wash cloths and ate them whenever possible. She also developed a tendency to steal items, her favorite being shoes, and would carry them around in her mouth. She never got over the shoe stealing and still has a shoe hunt every weekend.   🙂
Scitzo sees both her oncologist and regular vet once per year and has routine blood work done every 6 months. She has not been vaccinated since her diagnosis. She eats a modified cancer diet supplemented with Vitamins C and E and 3 fish oil capsules daily.
We are so grateful for the time we have with Scitzo, however long it lasts. We know we have been very lucky. We lost our Oneida to lymphoma after a 16 month battle.  Scitzo’s diagnosis was 3 months after Oneida’s. Both girls were in chemo together.
« Sawyer | Tessa »