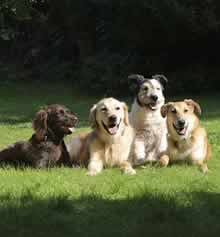 “Glutathione-S-transferase polymorphisms in dogs; association with risk for lymphoma and response to chemotherapy”