I love to receive notes like this, I’d like to introduce you all to Harley please enjoy his story. Thank you so much Thor for sharing Harley with Chase Away, much love to you and your wife and keep on living it up Harley we love survivor stories !!!!

In the early spring of this year, I heard about Chaseawayk9cancer on the radio here in Atlanta. I submitted a photo of our child named Harley to post on the van for the cross country walk in 2013. 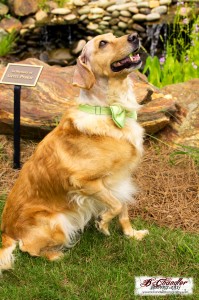 I was engaged to be married on May 26, 2012. This was not our first marriage and neither of us have children. Looking forward to our upcoming wedding as we were both approaching the 50 year old mark, we had no clue what the year 2012 was going to throw us.
In February of 2012, Harley was diagnosed with an MLO tumor that was deteriorating his skull. The tumor was growing outward but was also growing into his brain. MLO tumors are very rare and little is known because of the low number of case studies. Typically they go undetected until neurological signs appear at which time they are too late to treat. Although Harley was showing no outward signs other thatn the lump on top of his head, our veterinarian could do nothing at that point and suggested we take Harley to the University of Georgia College of Veterinary Medicine which was a two hour drive away.
Upon arrival at UGA, Harley was diagnosed and a plan was set in place to treat the tumor. I should insert here that Harley is an 8 year old male mixed breed miniature Golden Retriever. My wife found him at a flea market in North Carolina and purchased him for $20. He is a very intelligent and loving dog and we were not going to let money determine his fate. His best chance at survival was to have surgery to remove most of the tumor (they were hoping to remove 80% at the most because it would have to be carefully chipped away from his brain) and then follow up with radiation treatments which would be determined after the surgery.
On March 20, 2012 Harley went into surgery with a team of neurologists, oncologists and radiologists.
When my wife got the call that surgery was about to begin, she prayed for a miracle from God. “God I am asking you for a miracle. Please let the tumor peel away from Harley’s brain and give him a complete healing”.
We waited for 5 hours to get the call back from Harley’s surgeon. He was very happy with the results and his initial comment was, “I was so amazed how the tumor “peeled away” from Harley’s brain.” There were some complications with bleeding during the surgery but the doctors were able to get it under control.
Three days later Harley came home to recover. We returned in early April for a CT scan to determine what was left. The scan showed 2 microscopic specs that could have been bone fragments or remaining tumor. More than 99% was removed during surgery. His radiologist recommended 4 weeks of radiation treatments, 5 days per week.
Up to this point, between the diagnosis and surgery, we had paid UGA over $6000. We both agreed that we would spend our honeymoon at home with Harley and cut any costs where we could to pay for his treatment, but the radiation was going to cost us another $1000 per week. We had no idea where the money would come from but were going to do everything in our power to see Harley got the best care.
After his first week of treatments started we were blessed one more time. I won $10,000 playing the Georgia Lottery. This money would be used to cover the cost of his radiation, to complete the payments of our wedding reception and a gift was made to our church in memory of a friend that passed away Easter morning.
The first 3 weeks of radiation went smooth, but the final week really kicked Harley down as well as taking a toll on the two of us. It was now 2 weeks before the wedding and Harley was slowly starting to recover.
The wedding went off as planned and the two of us spent a great week of non-stop spoiling of Harley. In September we carried him back to UGA for a chest x-ray. The results were great. His lungs were clear and there were no signs of cancer. On November 25, we made yet another trip for a follow up CT scan. I am happy to say that also came back clear. No sign of cancer. Initially the radiologist did not think that Harley’s hair would grow back on top of his head and ears because of the amount of radiation he received.
My wife’s comment to our surprised radiologist was, “You see, I asked God for a COMPLETE healing!”
« Happy Healthy Chewy | Kelley »