Why Early Detection is Vital 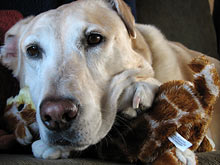 This is a rather easy “survivor” story to write, as far as cancer goes. Kelley came to us ironically enough, after our beloved yellow Lab, KC (or Casey) died from cancer. He initially was diagnosed with a cutaneous melanoma for which we did surgery and began chemotherapy and fully expected him to live at least a year in remission. But he had two kinds of cancer at once and soon after his first round of chemo he became seriously ill and we discovered that he also had deadly T-cell intestinal lymphoma. He was gone within a week of that diagnosis.

Our hearts were shattered and we debated getting another dog. But I soon found myself needing another life to focus on so I set about getting what I like to call a “project dog” which is a rescue dog that no one else wants and/or can handle. So I got on Petfinder.com and started looking for yellow labs. I came across a dog named Sammy at a small shelter in the mountains and they said she was mostly deaf, about 5 years old, and needed someone with a lot of patience. That sounded perfect to me so off we went to meet her. 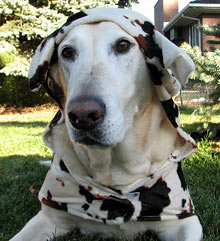 It turned out that 1) she wasn’t a Lab-we still aren’t sure what she really is. 2) she had been in 2 homes and had been scheduled for euthanasia when the rescue took her and 3) she was HUGE-about 130 pounds and out of control. I knew she wasn’t the best fit but I also knew few people could take a dog like her. So in the spring of 2002 she came home with us. She has made a lot of progress since then-she slimmed down, we discovered that she has only minimal hearing loss (she just needed training) and although she has her “issues” she is a very sweet and funny dog.

Because of what I do for a living I am super vigilant when it comes to lumps and bumps on my dogs. Especially after losing KC I was not about to miss something. So in the late spring of 2007 I noticed a lump on Kelley’s hind leg and I was immediately alarmed because it was making her fur stick out funny and it had appeared so suddenly. So my vet did an aspiration and he was able to see right away what it was: a mast cell tumor. You can imagine how I felt. I couldn’t believe I had another dog with cancer.

Mast cells are tough buggers. They spread like spider legs so the biggest problem is getting clean margins. If the surgeon can’t get clean margins you have to do radiation or the tumor will spread. But because we caught it so early, my vet was able to get clean margins and since the tumor was fairly low grade, no further treatment was necessary. The only thing she has left from her cancer experience is a large, Frankenstein-like scar on her leg.

She is now almost 2 years post surgery and the tumor is unlikely to return but I keep a close eye on her and all of my dogs. Please be sure to have all strange growths checked out quickly. It can mean the difference between life and death, or level of treatment required.