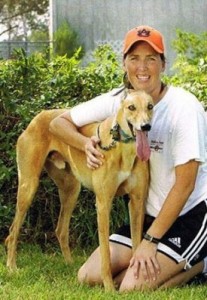 Luke was a retired racing greyhound who came into my life in 2005, after a very long career on the race track.

I could go into a short synopsis about what Luke and I got to share over our six years together but I would rather just share a short story about a three year cancer survivor.  Back in April of 2008 Luke started having urinary tract infections.  I took him to the vet where they thought he could possibly have an enlarged prostrate. I was recommended to a specialist that had more advanced ultrasound equipment.  Upon seeing the specialist, an ultrasound was done on Luke.  When the specialist brought him back in, she stated that he needed surgery as soon as possible to remove two internal tumors.  She described one tumor as the size of a walnut and the other the size of a baseball.  It was not a hard decision. If surgery was going to make him better then I was going to do it. I left him there that day to have his surgery and brought him home a couple of days later.  The results came back several days later and the tumors were positive for cancer.  The specialist stated that by having the surgery it would give Luke one additional year to live and the cancer would most likely come back as the cancerous cells had already moved into his lymph system. Apparently Luke wanted to prove to everyone how strong he was and lived an additional three years instead of just the one stated by the specialist.

Unfortunately, being a Marine there is always the danger of deploying. I had to deploy back in February of 2011 to Afghanistan. I am very lucky to have a great dad in my life who was willing to watch both Luke and Libby (his little Toller sister) while I was gone. My dad was sure to give me updates once a week to let me know how well the two were doing. One day in early June I got an email from my dad that said Luke wasn’t doing too well. He just wasn’t acting himself. Luke, being one always happy to go on a walk, walked about 100 yards and then just stopped. He wouldn’t budge. So my dad took him back to the house where he was very happy to go back in the house and lay down. From that moment he started noticing that he was having trouble breathing and laying still. He would get up and pace regularly and just wouldn’t rest. The biggest signal was when he stopped eating. My dad scheduled an appointment with his vet and took him in a few days later. Because of his labored breathing the vet decided to take a chest X-ray to check for pneumonia. As soon as the X-ray came back the vet knew it wasn’t pneumonia. His lungs were full of cancer cells and there was fluid all around his lungs.  It was now time to make a decision and my dad left it up to me. He emailed me with the details and I called him that night from Afghanistan. He told me everything and asked me what I wanted to do. As hard as the decision was, I knew it was the right thing to do. As much as I would have liked to have seen him when I came home from Afghanistan two months later, I knew it was not right to have him suffer. I told my dad that it was time to let him go but that he had to promise to be with Luke the whole time. One of the hardest parts for me was knowing I was doing the right thing but not getting to be the one to say good bye. Even harder still was when I returned to my home from Afghanistan and Luke (my shadow) was not there.

Luke never really did anything special but love everyone and every dog that he met.  I never tired from hearing how sweet my big boy was.  One weekend at Holly Springs Dog Days in the park and dockdiving event someone asked if he was up for adoption because he was so beautiful.  I had to tell her, “Sorry, but this one’s taken.”

Luke lived to be almost 12 and I had the privilege of having him in my life for 6 of those 12 years. On what would have been his 12th birthday, his sister Libby and I were competing with Carolina Dockdogs at our first dockdiving event since my return from Afghanistan. In memory of his life, Team Liberty (Libby and me) decided to donate a dollar to “Chase Away K9 Cancer” for every foot that Libby jumped that weekend. At the end of the weekend she had donated $77 to Chase Away. Many others who were inspired by our story and what we were doing for the cause decided to match our donation. Team Liberty conducted another jump a thon at Tidewater Dockdogs’ Harborfest on 9 June 2012. This was the one year anniversary of Luke’s passing. With Libby’s donation and others that matched her jumping efforts, Team Liberty raised close to $500 for Chase Away.

Luke was a certified therapy dog through the Delta Society.  We tried our hand at agility, but it just wasn’t for him.  He was meant to be a lover and a momma’s boy. He traveled around with his sister Libby to various dock diving events to cheer her on.  He also wore the Chase Away Vest walking through the crowds at the events collecting donations for Chase Away K9 Cancer.  As a cancer survivor it was a perfect job for him.  That is what he was meant to do, walk around to get petted and raise awareness for a great cause so near and dear to so many.

Luke taught me so many things, but above all else he taught me to take one day at a time, stop and smell the roses, that a good romp in the yard is good for the heart, and that a little couch time now and again never hurt anything.  He truly was and still is my heart.

Thank you Missy for sharing Luke at events and having him wear the Chase Away K9 Cancer donation vest.  Yes some dogs were meant to fly and amaze the crowds but it’s the very special ones that were meant to be the special crowd pleasers and share their love with the crowds.  Since Luke’s passing so many folks have continued to make donations in Luke’s memory either by pledging jump distances by his sister Libby or in his memory of being a donation dog, he will never be forgotten!!

Major Missy Gordon you are a shining example to us all !!!  Love you…..Cera