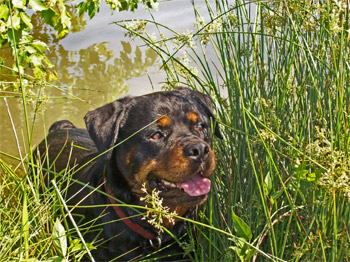 On February 11, 2004 Dazee came into my life. She was my first rescue – not from an organization but from the people who were mistreating her. At 14 months she was close to 30 lbs underweight, had pneumonia, heart worms, intestinal worms, ear mites and looked like the “junkyard dog” image with tattered ears and scruffy coat. When I first saw her, she was chained inside a pen unable to move her head from where the chain had caught on the fence and penned her head to the side. She could move her back end up and down but nothing else. I was heartbroken that anyone would treat an animal that way! After having just lost Argo, Dazee healed my heart.

A year later, after lots of food, heartworm treatment and many trips to the vet, not to mention the love given, Dazee was a joy to be with. Her Rottweiler breeding was beginning to come out; she was full -blooded registered German and with the good food and care, was looking exactly as a Rotti should – energetic, loving and so good with small children and puppies. We took her on many hikes and she was the perfect hiking dog, sure and steady.

The years passed too quickly and in April 2011, Dazee tore her cruciate ligament and needed knee surgery on her back left leg. After the surgery, she never seemed to recover like she should have. I had to encourage her to walk and gradually she did but our daily 2 mile walk was a thing of the past. We did go on that long walk by the farm a couple of times but more and more, Dazee would stop and give me that look. I knew she was ready to turn around, so we would head home. Off and on I noticed she would limp, favoring her left front shoulder.

In August she began limping more and I noticed a bulge in the right shoulder. After a checkup by the vet, she was diagnosed with bone cancer. Such a stoic girl!! For almost 5 months we battled that cancer with everything I could do. On Thursday, January 26, 2012 at 9:30am Dazee, with help from the vet, passed on, leaving me with a broken heart!! She was a fighter, all the way to the end.

I grew up the best way possible – “in the company of dogs” – I can NOT remember a time in my life when there wasn’t at least one 4-legged family member. After my mother’s loss of Argo, and learning that canine cancer claims on average one dog in three, every time I look at my three girls that statistic haunts me….1 in 3…totally unacceptable; I knew I had to do my small part to help Chase Away K9 Cancer.

Rest in Peace my sweet sisters. Argo and Dazee, you are missed every day…