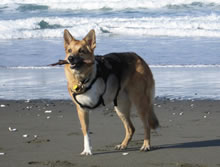 Every day in veterinarian offices around the world, there is a pet guardian who must decide whether or not to amputate their dog’s leg in order to save his life. At that moment, under the harsh glare of the exam room lights, it may be difficult to envision their best friend bouncing back into good health on three legs. 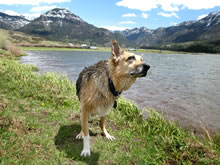 But thanks to one special three legged dog named Jerry, more people are seeing that their canine family members can have healthy, happy lives after losing a leg. Jerry is the inspiration behind Tripawds.com, an Internet community for three-legged pets and their humans.

In November, 2006, Jerry was diagnosed with osteosarcoma, an aggressive form of bone cancer. His parents, Jim and Rene, were shocked to learn that immediate amputation of his affected leg was the best way to alleviate the excruciating pain their boy was in. They had never even seen a three legged dog before, and weren’t certain Jerry would be happy as a Tripawd. Doctors assured them that most dogs do great on three legs, but the couple had a hard time imagining their adventurous hiking dog getting around like that. Taking a huge leap of faith, they went with the vet’s suggestion, and proceeded with the surgery. 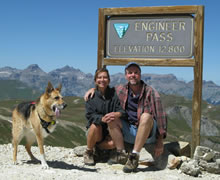 Even with amputation, Jerry’s vets only gave him four months to live past his surgery. Sadly, amputation is palliative treatment only; most dogs will succumb to osteosarcoma in less than two years, and many within just months. But as weeks turned into months, this eight year-old pound puppy outlived his prognosis and surprised everyone by demonstrating his tenacity for life as a “tripawd.”

After the Jerry gained his strength back and reverted back to his old adventure-seeking self, Jim and Rene decided to make the most of their remaining time left together. Within six months of Jerry’s diagnosis, the couple sold their business, their house and most of their possessions, and hit the road in an RV to travel across North America together as a pack. 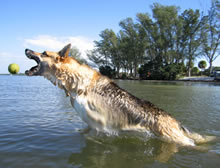 Throughout their journey, Jerry’s website, Tripawds.com, continued growing and reaching out to other pet parents facing amputation for their best friend. What began as a simple diary about Jerry’s disease evolved into a community where Tripawd parents can go for comfort, support, tips and advice.

Tripawds.com provides a wealth of inspiration: Jerry’s dog blog is regularly updated with movies of three legged dogs running on the beach, catching Frisbees, playing rough with other dogs, and even swimming. Readers share their own stories in the Tripawd Discussion Forums, and can chat live with each other any time of day in the Chat Room. In addition, Tripawds.com includes health tips, definitions of canine cancer terminology, and a even has a storefront with tripawd needs in mind.

Jerry’s heroic battle with osteosarcoma lasted almost two years past his diagnosis. During that time, he constantly amazed everyone around him, by demonstrating the adaptability and resiliency of three legged dogs. Despite his adversity, he never moped, or cried, or felt sorry for himself. When he stumbled, he got up. When he was tired, he kept trying to play. He simply adapted to living on three legs, without ever looking back.

looking for some great advise and information please checkout Jerry’s page honoring all those great Tripawds that are living life to the fullest http://tripawds.com