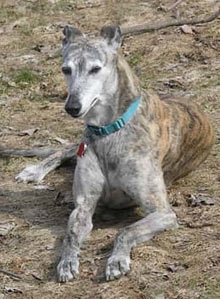 While I grew up with spaniels, I had known I wanted to adopt a retired greyhound for years. Perhaps this was just another way to assert my independence (first move out east, then find my own breed of dog), but I was also drawn to their Erte-like appearance (I’m such a sucker for art deco), and of course the cause. “Save a retired race dog from certain death!”

I moved to Vermont in 1997 with three short-term goals: Get an apartment, get a job, and get a greyhound. Within six weeks, all three had been accomplished. A little red brindle girl, Katie was the perfect combination of spunky, sassy, and lazy. Initially, I didn’t give much thought to getting a second grey, but exactly two years later, we welcomed another little red brindle girl into our home. Ellie easily fell into our routine, and more importantly, she didn’t challenge Katie’s status as Alpha Dog.

My boyfriend, George, and I noticed that something was wrong in October of 2006. Ellie seemed a little “off,” but we weren’t sure if we should worry. The vet looked her over, told us it was probably arthritis — she was almost 10 after all — and sent us home with a bottle of carprofin. When the pills stopped working after a few days, we found ourselves back in the vet’s office for X-rays.

I’ve gone through a lot of hard times with Katie. She has had to have her stomach pumped twice, after getting into something she shouldn’t. She fell through a glass door and severed a major artery. She had leptosporosis. She’s been attacked three times. Ellie has always been my rock. Sweet, good, dependable Ellie.

It’s one thing to know that OS is the leading cause of death in greyhounds. It’s another thing to know that OS will be the cause of death for your greyhound. The next few days were a blur. Crying hysterically. Meeting with the specialists. Calling friends and family, “Ellie is dying!” And the guilt, oh, the guilt. All the signs she gave us, which we chalked up to her age. Truth is, it’s hard to run and jump and play when there is a tumor at the head of your femur, jamming into your hip socket. 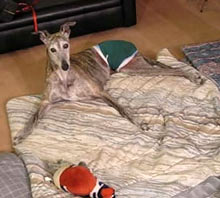 Guilt doesn’t change the big picture, though, and we needed to move forward. Euthanasia. Amputation. Pain management. How to treat your dog’s cancer is deeply personal. You have to consider what you can emotionally and financially handle. You have to consider what your dog can emotionally and physically handle. I looked into Ellie’s big brown eyes and saw that she wanted the pain to stop. But she wasn’t ready to go.

She had three good legs, her chest X-ray was so far clear, and she was still full of life and love. On November 6, 2006, five days shy of her 10th birthday, my little Ellie’s left hind leg was amputated.

The next two weeks were awful. Actually, they were beyond awful. She was hospitalized for three days, her right hind leg was full of edema for a week. She shrieked nearly constantly, and barely ate. The doubts came flooding in — how could I do this to her? What was I thinking? I willfully cut off my dog’s leg! According to our oncologist, following a protocol of amputation and chemotherapy, the average dog lives 400 days after OS diagnosis. Was it worth it? That’s an average, not a guarantee. The vets were amazingly supportive, and gently reminded me that whether she lives one month, one year, or three years, she is pain free and happy (well, after we pass this 2-week recovery period). We adjusted her meds, and slowly the pain ceased and the appetite increased. We saw progress.

The vets kept telling me that, “aside from the cancer, she’s the picture of health.” She was eating well, playing with her toys, and having a great time. Sometimes it would bother me to look at Ellie lying on her favorite dog bed, and see just a bump where her leg should have been. But she was so strong and confident, standing on her three legs that some people didn’t always noticed one is missing. I’d even watch Ellie ran across the backyard and forget one leg is missing!

We made it to her 11th birthday, the 400-day mark… all the way to the 4-year mark. She lived to nearly 14—a long, happy life by any Greyhound standards. In the end, we couldn’t blame it on the cancer. She beat all the odds, but she couldn’t beat old age.