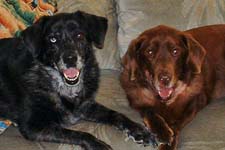 Our journey down into the pit began with a simple routine teeth cleaning. The vet called me after the procedure and told me he had taken a biopsy from ShyAnne’s lip because there was a little red bump there. Unfortunately it turned out to be a mast cell tumor.

She went back for more surgery to get “clean margins” and everything looked good but she soon had to have more MCT’s removed from her face and jaw area as well as her trachea. We tried chemotherapy but it made her very sick and then we found out that she had a malignant oral melanoma on her tongue. We started radiation therapy but once again had to stop because it made her very sick and her mouth and neck tissue became too ulcerated.

We could do nothing but keep her comfortable and happy for as long as possible. On August 23, 2003 we said goodbye as the tumors had grown to golf ball sized lumps and she was having trouble breathing. She had been such a happy, gentle sweetie with no complaints up to the end. I was beside myself with the grief and pain of losing my soul mate.

I brought her brother, Dusty, that day to say goodbye but also because he had his own story to tell. In June, when ShyAnne was being treated by the oncologist, Dusty started to have difficulty breathing so he went in for a CT scan and we found that he had cancer, which had metastasized, to his lungs. We decided to keep him on pallative care since there was nothing else we could really do but keep him comfortable.

After ShyAnne’s passing he had intermittent diarrhea, which was treated as stress, thinking that it was because of ShyAnne’s absence and ultrasound and x-rays showed nothing. By November it was getting harder to control his colitis and he began losing weight so the oncologist did another ultrasound. Two small tumors were found in his colon and rectum and there was little we could do but give him medication. He tried to be a happy little boy but I knew it was time for him to join his sister. I held him in my arms in the same room as ShyAnne had been in 3 months before and I kissed him goodbye as he looked up at me with a tiny twinkle in his eyes. He gave me a last little kiss on my nose, just like he had done since he was a puppy, and then he was gone.

The colon cancer had taken my little guy the Monday before Thanksgiving. Cancer had again won out, taking two of my best friends that I had loved more than any other before or since their passing.

It has been 6 years and I am still hurt and angry that they died from such a horrible disease. Because of this, we are pledging to help fight this disease by donating a portion of all proceeds from Photography by M to Chase Away K9 Cancer in honor of Dusty and ShyAnne.