On March 29, 2007, I took Gypsy into my local vets to have them look at her left front leg. She had been limping for a few days and I was sure that she and her brother had played too hard and she had pulled a muscle. After a series of x-rays, I was informed that my little girl had Osteosarcoma, bone cancer. I was devastated. I couldn’t believe that she had cancer. Then, I was given the news that having her leg removed was her only chance of battling this disease. I left my vet’s office scared to death. I had no clue what to do. I knew nothing about what was getting ready to happen and no idea how to deal with it. Gypsy, on the other hand, had no idea what was going on. She was still her happy-go-lucky self while her mom was falling apart.

April 2nd Gypsy underwent surgery. My vet sent her home with me six hours after the surgery, telling me that she would be fine. During the evening, Gypsy’s stitches broke and she started hemorrhaging. I rushed her to the emergency room where the doctors put her on an IV and stitched her back up. Gypsy had to undergo two more surgeries over the next five days. Then she contracted three staff infections requiring treatment with several different medications. I spent many hours curled up on the floor next to her bed in the hospital praying that she would make it. She wouldn’t eat and or drink, so she had to remain on an IV most of the time. It was difficult for her to make it outside to go to the bathroom since she was so weak and she didn’t know how to get around with only three legs.

Finally into the second week of her being in the hospital, she leaned over and kissed me. I was thrilled. I will never forget that day, because it was then that I knew she would make it.

Gypsy came home on April 13th. I walked her out to the car, opened the car door and turned to ask the vet technician the best way to get her in the car without hurting her. When I turned around, she had already jumped into the back seat. She was ready to go home. 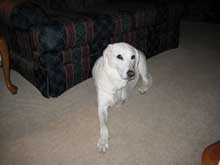 Over the next 18 weeks, she received chemotherapy once every three weeks. She did very well with chemo – no sickness until the last two treatments. I was thrilled when she received her last treatment, but I also was very frightened. When the treatments ended, I just had to wait and felt like we were in limbo until her next examination. She was scheduled for chest x-rays every three months. I cried all the way to the vet’s office, scared that each time they would tell me that her cancer was back.

Gypsy is 24 months cancer-free. She manages very well on three legs. She runs and plays just like she did before her surgery. On April 15th Gypsy turned 13 years-old. I thank the Lord for putting her in my life. She is certainly a blessing and definitely a survivor.