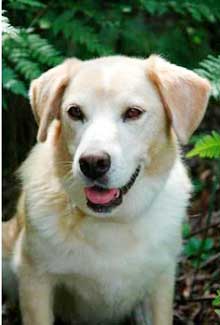 We saw her for the first time in a crate at PetsMart on a weekend in March 1998. It was adoption day and a number of local shelters had dogs and puppies there. Friends of Strays, a non-kill shelter from Princeton, IL brought a bunch of puppies and one adult dog. Marty, my husband, and I were half looking for another dog to keep our Yellow Lab, Copper, company while we were at work. Copper had been moping around the house since we lost our Shepherd mix, Raton, on Christmas Day, 1997, but that’s another story.

Marty had been going through chemotherapy for almost a year but he and I fell in love with the little yellow dog with white markings including a white wishbone on her forehead. We did our pet shopping, grocery shopping and went to the local bookstore before returning to Petsmart at the end of the day. All the puppies were gone but the little yellow dog was still there. She had a quiet elegance about her, like she was just observing life as it went by. I asked the woman from Friends of Strays about her. They had found her in a field wandering about 6 months prior and as most people wanted puppies, still had her. Tell me a story about a dog being not wanted and that just makes me want them more. I only asked one question, “Is she house trained?” And got the answer, “She is crate trained.” With that, we took her home.

She had no name. My Arab horse, Isis, had twins the previous year and the colt that we named Nikki, only lived 4 days. We figured the name Nikki was not used up yet, so that became her name. She was very shy in the beginning, wanting to just lay in a corner and not interact with Copper. It took a lot of coxing to get her to come out. One day, I brought home a stuffed squeaky toy which I presented just to her. She took it back to her corner, like a prize. One day, she came in the house and picked up the toy and I heard for the first time her “roo, roo” bark muffled by the toy in her mouth with her plumed fox tail wagging, she proudly marched around the house. I said, “roo, roo” back to her and Marty said, “Don’t encourage her.” I said, “But look, she’s happy, she looks really happy!” I knew then that Nikki knew she was safe with us. Unfortunately, she did not get to know Marty very well, as he lost his battle with cancer October 15, 1998.

A couple of weeks later, a friend of mine said, “You aren’t sitting around here anymore, your going to my dog club to watch my puppy graduate.” Thus, I was introduced to the Peoria Obedience Training Club or POTC. I took a Beginner Obedience class in 1998 and joined in 1999, taking both Beginner and Intermediate Obedience with Copper and Nikki. Later that year, I tried a new class, call “Agility” with Nikki. In the beginning, I was told she would never be an agility dog and I needed to get another dog. I believed in her and so she believed in herself. She seemed to like most of the obstacles but was afraid of the teeter totter. She would get to the fulcrum, put one foot forward and when the teeter moved, would pull it back. If I tipped it for her, she would go over it, but you couldn’t do that in competition. I found a wonderful trainer, who got Nikki over the teeter with a square plastic plate taped to the end and cheese spread sprayed on top of it. Once Nikki lost her fear of the teeter, she seemed to come out of her shell. Her joy in performing agility became evident as she wagged her tail all through the course. Although, she never wanted to leave my side and become a distance dog (being sent ahead), she became very good at doing everything correctly, earning many perfect 200 scores in UKC (United Kennel Club). When she made the Top 50 dogs in UKC agility and was posted on the website, I printed it off and framed it. She was one of only four mixed breeds on the list, a tribute to those dogs of unknown heritage.

When Nikki was 5 and Copper was 12, my vet told me that Copper’s spinal stenosis was so advanced that he would not make it through another winter. So, back to PetsMart I went to acquire another dog, so Nikki would not be alone when I lost Copper. At the front door, I saw a little girl holding a Lab puppy and asked her where she got it (as there were no puppies inside). Her mother wrote down the phone number which I contacted. The result was an 8 week old rusty red Yellow Lab puppy which I named, Charly, and he trapsed around the yard following Nikki and played tug with Copper. Copper was rejuvenated and Nikki mothered him. Now, I was at the club almost every night, feeling like a soccer mom, with agility classes with Nikki and puppy, manners, obedience and agility with Charly as he grew into the family. Once Charly was a year old, I started showing both Nikki and him in agility, mostly UKC as AKC did not register mixed breeds. When Charly was 2 years old and Nikki was 7, I lost my Copper dog. Now, I was back to two dogs and very busy on weekends, as I also discovered North American Dog Agility Council (NADAC). I was always away somewhere and my dogs were great travelers.

In 2004, I discovered Dog Scouts of America, which had a camp near St. Helen, MI for a week near a lake with a variety of skills offered that a dogs could learn. In July of 2004, we attended out first camp. There was lots of trainers and full schedules. The dogs earned badges for the skills they learned. We did agility, backpacking, swimming, lure coursing, and both dogs learned to play a musical instrument. It truly was a little bit of heaven on earth and the dogs were truly happy there. Both Nikki and Charly went through CGC (Canine Good Citizen) and TDI (Therapy Dogs International) testing at camp and were certified to be therapy dogs.

Nikki was a true therapy dog. When we went to nursing homes and the residents would form a ring of wheel chairs, Nikki would make sure that she went to everyone, plumed tail waving, smiling as she was petted. When she and Charly were in the reading program with kindergarten and first graders, Nikki would put her head on the knees of the child and look up watching him/her read, tail wagging. When the child would go to get another book to read to Nikki, she would whine and I would get asked, “Why is she sad?” I said, “Because she wants to help you choose a book”. So, very often, the little girl or boy would come back and get Nikki and take her with them to choose another book. It was as if she knew that each child needed attention to improve their self-confidence. I don’t know how she learned it but she was very good at making the child believe that she was listening to every word. Sometimes, I thought that she truly understood her role and knew she was making a difference.

When Charly was 5, I brought home another Labrador Retriever puppy and named her Cate. As Cate was only 6 weeks old, Nikki, now 10 years old, willingly played “Mom” again with the puppy following along after her as she traveled the yard.

There is so much I could say about Nikki. She went from shy dog to outgoing. She enjoyed the sport of agility, especially when her audience made a fuss over her. She loved just visiting with new people, was gentle with everyone. We were at our 7th Dog Scout Camp when the aggressive cancer, hermangiosarcoma, took her on July 15th, 2010. The Director of the camp placed the flag at half mast in her honor. I will miss her forever.

Thanks so much to Friends of Strays for taking her in and keeping her safe, so I could adopt her into my family. She lived a full and happy life and used up the name “Nikki.”

For no reason what so ever, the other day I asked Charly, “Where’s Nikki?” He disappeared for a few minutes, traveling the house, in search of something. He reappeared next to my chair in the living room with Nikki’s squeaky bunny, and dropped it in my lap. I know he got it from her bed.

As he never played with it when she was alive, I looked at him, he looked at me, sat and thumped his tail. I felt my eyes watering as I hugged him. I think he misses her too.