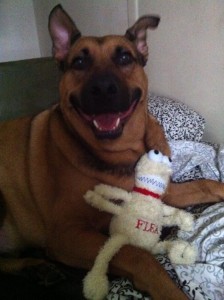 Maxwell’s Story:
Maxwell was the best thing that ever happened to me. 5 1/2 years ago I was looking on Petfinder.com and there he was, such a beautiful dog, I knew I had to adopt him. I went down to the APL and saw him. He was so sad and scared, sitting at the back of his cage. I knelt down and he slowly came to me, smelling my hand and allowing me to pet him. They brought us into the playroom and he walked over to me and sat right in my lap. That was it, we had found each other. Soulmates, best friends forever. We both needed unconditional love, safety, and comfort.

I promised him from that day on, he would never want or need for anything, and I would make sure with everything I had, he would always feel loved and safe. He brought so much to my life, he was everything I could ever ask for. It was me and him, partners against the world. Through a few moves, ups and downs, different jobs and loves, he was my constant, my rock. All he had to do was look at me with those big, beautiful eyes, lay down next to me as close as he could, and nothing else mattered. He was perfect. Perfect for me. He would lay next to me all night, no matter what. Wherever I was in the house, there he’d be. That meant the world to me. I wanted, each minute of his life to show him how much he meant to me. I knew he had a horrible past with previous “owners” and months on end at kennels and that brought a feeling of uncertainty and fear to him. I was so conscience of everything I did, I tried to always make him feel comforted and loved. I loved to nuzzle in his furry neck. I loved the way we would lay on the couch together, either me lying on his back or him lying at my feet. We would get all cuddled up and felt no need to move until we absolutely had to. That’s all we needed, each other.

He’d tap at the door of the bathroom with his paw, as to say come on, let me in. Sometimes he’d choose to enter, other times he’d lay right outside until I came out. Either way, was close to me, protecting me. He was so proud on our walks. If we passed a stranger, he’d bark, watch them, and then after we had passed I would pat him on his back and say “good boy Boobers” (that was my nickname for him), he’d perk up, head held high, and wag his tail as we kept on our way. When I would pick up the pace and start a little jog, he got so excited, smiling as wide as can be. He loved squirrels and any other land critter he could set his eyes on. His senses were impeccable. He could spot things a mile away, hear sounds that escaped me and the sense of smell…whenever I got a new outfit, he knew. It was amazing. He’d walk up to me and just smell away, as if to say, “new outfit, eh?”

He loved his comforts too, big pillows, comfy blankets and a soft warm doggy bed. I wanted to spoil him as best as I could. Whatever I could afford, I wanted him to have. Sweaters, hoodies, even a pair of Christmas jammies with legs and all, he loved and proudly wore out on our walks. He loved my homemade chicken stock, especially when poured over his usual dinner time food. He never begged, really. Just quietly sit next to you, hoping and waiting that something would drop. Trust me, when it did, he found it. Sometimes he may tap your leg to remind you that he was there while you were eating, but that was as far as the begging would go. One of the funniest things he would do is when he was eating, if he heard something he should be barking at he’d try to do both at the same time. Munching away he’d throw in a low bark. It was so adorable. When he would dream, which was pretty often, his whole body would go into these waves and movements, I couldn’t get enough of it.

He was so big, 130 lbs and to see him just wiggling about and his paws quivering, it just made me smile. Come to think of it, pretty much everything he did made me smile. I could be having the worst day, come home, and within minutes my heart and mind would heal. Just the look on his face when I’d walk through the door. He’d always be right there, within a foot or two of the opening door. Just as happy as can be. Talk about feeling so loved. If I had to do something before we took our walk, I’d make sure to bring out his leash and place it on the table so he knew, even though there may be a delay, we indeed were taking our evening walk. i didn’t want him to think I’d forgotten. He always knew he’d be getting a treat, too. If mommy had to leave, 9 times out of 10, he would be getting a little something on her return. The few times I couldn’t bring him something I would bring out one of his Milk Bones. It was so cute, he’d look at it and turn away, like he was saying “no, thank you”.

There are not enough words to describe how I felt about my beloved Maxwell. I wish I could describe every emotion, every moment he brought me joy. There are so many and I miss him so much. My life was so full with him in it. I never wanted for a hug, or love, or a friend. I had it all. He gave me it all. I know I tried to do the same for him, every moment of every day. He deserved that and the world and more. When I would wake up, and there he’d be right next to me, either sitting or lying next to me, that’s all I needed to start the day. When he’d look at me out of the corner of his eye from the couch when I’d leave, I just felt so good. He was keeping his eye on me, I loved it. I wish with all my heart, he was with me right now. The nights are so empty and lonely. We would sit down and watch our shows and do our routine until it was bed time. I miss that so much. I thank God I was blessed with him, I prayed for him all the time. I never wanted our time to end.

Friday night he was feeling fine. I got home from work we did our usual walk and came home to relax and I gave him his bone. All of a sudden a hour or so later, he showed some discomfort. He started walking around trying to get comfortable. He got sick, and then laid down with me, still agitated but trying to just lay with me. The next morning, yesterday (Saturday) he was lethargic and wouldn’t even take a small piece of fresh roasted turkey. I knew something was wrong and took him to Great Lakes Vet Clinic. His gums started turning pale grey on the way. We rushed him in and found after an ultrasound his belly was filled with blood. An undetected mass had ruptured. They went ahead with diagnostic testing and saw all his tests, urinalysis, blood, x-Rays, were not showing anything negative. They said he was an excellent candidate for surgery. We decided to have it done that same night at the Westpark Animal Hospital. My best friend and I Jacqueline rushed him over there and the surgeon was very positive. It could be a cyst, a hemotoma, or a benign or malignant Tumor. An hour or so later they began surgery, 20 min later they called me in. They found 3 bleeding tumors on his liver that were inoperable and were going to rupture. I begged them, I pleaded, “is there anything, anything I can do?? Whatever it is, I’ll do it. I just want him to live! He was FINE yesterday!” They said no, I’ll never forget the vet surgeons words “Something’s money just can’t buy”. I fell to the floor. I could not let him go. The vet told me, to wake him from anesthesia would bring nothing but pain to him. I thought of waking my Maxwell up just to have him know he was dying. An impossible choice and no time to make it. I wanted him home, I wanted to lay with him and hold him. But, I couldn’t let him suffer just to pass on. If there has been ANYTHING I could have done, if I would have been given even the slightest chance of hope, I would have taken it and done whatever was needed. He is my best friend, my soulmate. The vet told me He wasn’t going to live the rest of the life he was meant to. I went in and sang to him our song, the song I had sung in his ear ever since I met him, “you are my sunshine”. I held him him, stroked his head and neck and sang again. We let him go, to cross the bridge. He passed away. What is so hard is that this all happened within 24 hours. They said these types of tumors are undetectable and show no signs until they rupture. I can’t believe he’s gone. He was so healthy and active all the way up to late Friday night.

He made me feel so happy, so complete.
I thank God he brought him to me, I pray to God he unites us again when it is my time to leave this earth. Until then, I just hope and pray with all of my heart and soul, that he is here with me in spirit and can feel my love, each day growing. I miss you, Maxwell. I love you, Maxwell. Please wait for me and guide my way to you when it is my time. When that day comes, we can play and run in the snow, the leaves, the water. We can cuddle up close and keep each other loved and safe for all eternity. Til that day comes, stay with me, close to me, know that I will miss you so much until that day and know that my love will do nothing but grow and keep growing. I love you Maxwell…….Sharon Culkar

My heart goes out to you Sharon, losing Maxwell so quickly is so very devastating. ((hugs))  love and understanding of the heartache you are feeling so deeply.  Thank you so much for writing about Maxwell from your heart, the love you shared will never leave you and the memories you shared together will be with you forever. . . . . . . . . . Cera