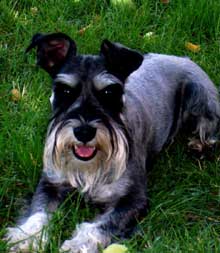 We received Oreo as a gift in July 2003. He was a scruffy bundle of energy with a white spot on his chest and under his tail! We decided that since he was “Cream” filled, he would be named Oreo. Oreo was very smart and learned lots of tricks quickly! He had separation anxiety and that presented a new challenge! But it was easily conquered and Oreo became my constant pal.

Oreo learned how to get treats from a machine, close the door and even to say “Hello” and his name! He always amazed us with his ability to learn. He greeted us when we came home each day with a big “Hello.” It was awesome to be loved by such a wonderful friend. Oreo loved chasing the neighborhood squirrels and they loved teasing him as well. He would stand behind the trunk of our lilac tree thinking he was well hidden from the little teasers!

I was traveling for business and when I returned home, my husband stated that he noticed Oreo was coughing. He wasn’t acting ill and had not been in a kennel or at the groomers but we thought he might have a cold. I took him to our vet who examined him and took several x-rays. The vet recommended we take Oreo to Colorado State University for further exams.

Oreo was diagnosed with Malignant Hystiocytosis on September 7th 2010. He had a tumor in the right lobe of his lung and several in his spleen. He underwent several chemo treatments and was participating in a clinical trial. We had stopped the chemo for several days so his digestive system could recover from being upset from the medications. During this time, he began to have difficulty breathing and was in distress. I took him to CSU Tuesday, December 28th, to see if there was anything they could do to help make him comfortable.

After an examination, ultra sound and lab work, it showed that the tumor had tripled in size and there was nothing further that could be done. The doctor was awesome and even called our local vet to inform him of Oreo’s condition. Our vet wasn’t in the office but the secretary made the appointment for us to bring Oreo in that afternoon.

When we arrived at the clinic, our vet had been called and he came to the office to perform the procedure. My husband, stepdaughter and I were present and I held Oreo as he passed over the Bridge. There he was greeted by his dad, Jake, who had passed just last year. I know they are catching up and playing. I miss Oreo everyday and think of little things that he and I did that were special for just us! He certainly blessed our lives and can never be replaced! This “Oreo” cannot be mass-produced, as he was “One of a Kind”!