Well. That wasn’t supposed to happen. 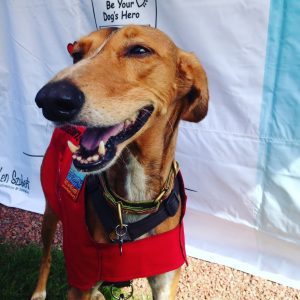 I get that there are no guarantees in life, but we did our research to avoid this fate.

It all started in 2006, when Ellie was diagnosed with osteosarcoma (the primary killer of retired racing greyhounds). She defied the odds and lived 4 more years, eventually—and impressively—dying of old age. We like to think that Dingo was cheated, but his death from osteo, less than a year after his diagnosis in 2012, is more typical.

We love greyhounds. Who doesn’t?! They’re sweet and soft and—aside from the cancer—pretty much perfect. But we craved a Sighthound who would live a long, happy, healthy life. So we rescued first a Whippet (Vishna) and then a Saluki (Heidi). Both breeds have a significantly lower risk of the dreaded “C” word.

Vi died in 2017 of heart disease—which is also tremendously not fun, FYI, but at least wasn’t cancer. So we had that going for us. I guess. Heidi had always been the picture of health. At her last physical, way back in October (you know, a mere 4 months ago), our vet was impressed with her bloodwork and, really, everything aside from her teeth. (I’m terrible at maintaining my dogs’ dental health… Hey, we all have flaws.) I was sure she’d live to 14, 15, maybe even 16. Why not? Seemed reasonable.

Was. Damn, that’s hard to type. And even harder to read as I prep this post.

Heidi loved to run and was the perfect 5K partner. She’d match my 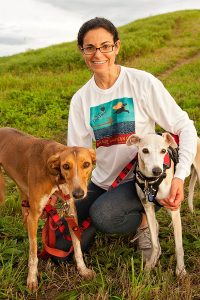 (slow) pace and lope by my side, a big grin on her face as her ears flapped with each stride. She loved to go for walks. And she and I shared an inherent need to be as cozy as possible at home. For Little Miss Heidi, one pillow bed was never enough; she’d stack as many as she needed for maximum fluff and comfort. (This is why dog beds far outweigh the number of dogs in our household.) That said, each evening, she’d ditch her Most Amazing Bed Stack Ever for the family room couch. Its fleece-backed blanket and two decorative pillows were the ultimate luxury for our Saluki Princess. After dinner, she’d wait impatiently for us to head downstair—leaving her carefully crafted pile of pillows for Dylan—then stare at the couch until I arranged everything “just so.” She had very strong opinions on this matter, and had me well trained. But it was worth it. Once everyone was settled in their rightful space, she became the best Snuggl-uki on the planet. I often stayed up later than I intended simply because I didn’t want to unwrap myself from her warmth.

She was sweet. She was silly. And, like most hounds I know, she was stubborn. She was difficult to impress and easy to offend. She did not like wearing anything beyond her collar and harness, which is why, despite being a Sighthound with no body fat, she only had a few outfits—all of which were functional, lightweight, and easy-on/easy-off. She did not like peanut butter, oddly. Nor did she like crowds or hardwood floors (and she never forgave us for remodeling our bedroom). Or the neighbors’ cattle. When they’d move around out back, she’d warn us with her incessant cries, “Cows! Cows! Cows!” (Vesper would run to the front window, assuming she spotted the Offensive Orange Cat who often lurked in our driveway. These two understood each other quite well, but somehow never got their signals right on that one…)

Heidi was—granted, I’m biased here, but I know others who’d agree—95% perfect. She was the right balance of “timid” and “charming” that made everyone who met her love her. And she was my rock. While every other dog in my life had medical files that could fill bookshelves, Heidi only went to the vet for regularly scheduled physical exams. In nearly 10 years, she had only one medical emergency. One. Again, “16” seemed distinctly possible.

So I wasn’t surprised when, that fateful Saturday morning, George assumed he had heard Dylan shriek and crumble at my feet. But no, it was Heidi and she wouldn’t even let me touch her. She nearly bit me when I tried, which is something she’d never done to either of us, not even a “warning” snap, before that day. Clearly, something was very, very wrong. We called the vet, put on her coat — and muzzle!—and raced her in.

A thorough physical exam found nothing beyond possible muscle pain. They did a little laser therapy on her, prescribed a short course of steroids, and sent us home. It eased her discomfort, but she still wasn’t eating. So we scheduled x-rays for Wednesday. Our vet was worried about a slipped disc. I, being me, was worried about a tumor on her spine. We were both very, very wrong.

All hell broke loose that morning. Though she seemed fine—fine!—just a few days earlier, she was now anemic and bleeding internally. An abdominal ultrasound showed her liver littered with irregular nodules. “Hermangiosarcoma” the specialist—where we found ourselves a few hours later—declared was the likely culprit. We couldn’t confirm due to the risks of further testing, given Heidi’s frail state. But it matched the profile.

Cancer. This wasn’t supposed to happen.

Hermangiosarcoma is a nasty little beast. Hard to detect, it’s even harder to beat. According to the research I found, even if caught and treated in time, you’re lucky to get 5 months.

Sweet Heidi, as our vet called her (and just about everyone else. “First of 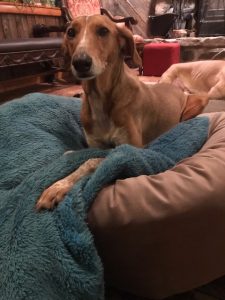 all,” the vet tech said on the phone shortly after they brought her inside, “I am totally in love with your dog.”) deserved so much better. Theoretically, Heidi was the oldest hound in our pack. But she didn’t look it. Her four legs were strong, and her beautiful red face was just as bright—with that defined white blaze—as when we first met her. No gray, no wrinkles, no lost muscle tone. Only her cloudy eyes made it clear she was older than Sierra. And then there’s that spotless health history. Dylan has osteosarcoma (typical greyhound…), two heart conditions, and a bad habit of injuring himself in new and inventive ways. Vesper looks like an old man with his graying muzzle and arthritis so severe his wrist is nearly sideways, not to mention terrible allergies and (most likely) PTSD. We didn’t anticipate saying goodbye to anyone anytime soon, but figured that—eventually—one of the boys would go first. (At 4 years old, Sierra has the odd injury to contend with, but is otherwise fine.) And I prayed that we’d make it through the pandemic with our pack intact. Times are tough enough, you know?

Clearly, someone had other plans for Hounds of Greyhound Manor and 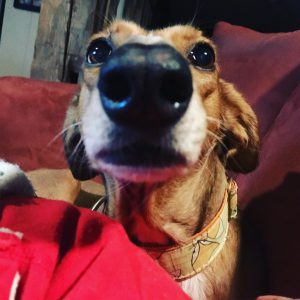 I’d really like a word or two with them. Because this wasn’t supposed to happen.

Our love and prayers go out to our dear friends Debbie and George that all too quickly lost their beautiful girl Heidi this past week.  Debbie, George and so many of their friends and wonderful volunteers have organized and run the Chase away 5K in Vermont the past 10 years. 2020 was supposed to be their year to celebrate 10 amazing years and sadly that didn’t happen but Debbie who is a very amazing woman was able to pull off a pretty darn good virtual event, thank you so much Debbie for all your hard work.  Now sadly 2021 has started out very badly with their loss of Heidi.

Sending loads of hugs and love to you both, keeping Dylan in our prayers that he continues to do well and kick cancers ass after losing his leg to cancer.