I lost my best friend shortly after the New Year in 2007. It’s a loss that was so sudden I’m certain I’ll never forget the feeling. 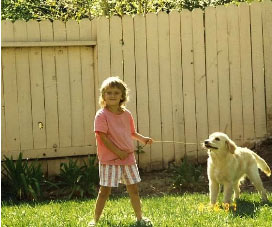 Sugar and I grew up together from the time I was 5. I loved her like a sister and, being an only child, she was my most loyal friend. I have so many fond memories of the two of us running around the house, playing tug of war with old towels, the way she stalked any food left on the counter, and even wiping her muddy paws off before coming in the house. The smell of wet dog will forever fill me with nostalgia.

As Sugar got older, she developed arthritis like many dogs but with weight management and joint supplements it never slowed her down for long. She was the greatest welcome party, always giving you her when you walked through the door. All these years later I still find myself opening the front door with anticipation, hoping against hope that she’ll greet me again.

Sugar was always a happy dog. She aged gracefully and her light color disguised the graying of her face. It used to astound my mother and I when people we’d never met would pass us in the neighborhood and say, “Is that Sugar?” My dog was famous.

They say hindsight is 20/20. Perhaps if I’d known then what I know now, we would have acted differently in her final days. But she was as stoic as any dog and showed virtually no signs of what was happening inside of her. I returned home in the evening on December 31, 2006 to my mother telling me that Sugar didn’t eat much of her dinner. Keeping in mind that she loved to eat more than just about anything else on the planet, this was indeed a little strange but not unheard. She occasionally ate something outside that made her a little ill and it passed. So we didn’t give it much thought and the next day she was returning to her normal self.

Fast forward to January 4, 2007. There was definitely something wrong with Sugar. She was awake but barely moving, refusing to leave my mother’s bedroom and go downstairs. When she finally did budge, she went out to the yard and lay on the grass. I was 15. I wasn’t ready to accept the end. I couldn’t fathom the idea of it. I said my goodbye to Sugar, telling her to hang in there and get better, and I headed off to school, my mother assuring me she would take Sugar to the vet as soon as they opened.

My mother tells me that Sugar faded fast after that. She became so weak that my mother had to carry her to the car, pulling her along the floor on a towel as my mother is rather petite.

Everyone sprung into action when the two arrived at the vet’s office. Preliminary tests revealed Sugar had internal bleeding so they immediately began blood transfusions to stabilize her. This went on for a couple of hours as they prepped her for surgery. She seemed to be getting stronger. Then her heart stopped. They resuscitated her and it happened again. Eventually her heart couldn’t do it anymore. Sugar died that day, surrounded by people who loved her and fought for her. She wouldn’t have wanted it any other way. My parents brought me by the vet’s office to say goodbye to her. I had to be dragged away in the end, as I couldn’t bring myself to leave her side, sobbing into her fur. 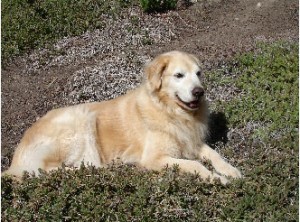 Sugar lost the fight against splenic hemangiosarcoma when she was 10 years old. I learned later that I had lost my best friend to the same silent killer that takes so many dogs, and yet so little is known about it. I pray for a cure, so that others can save themselves from what I experienced and I pray to see my best friend again some day when we cross Rainbow Bridge together.