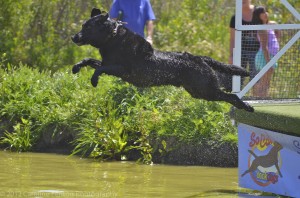 Meet Brutus, he was introduced to me thru a very generous donation by Brutus’s Aunt honoring another dog named Brutus that was a tracking dog for Dick Baumer in Vietnam. I’d like to share a little of the note that I received from Dick and the photos that he shared of the original Brutus.

Brutus is named for one of my labs in Vietnam. During that war I was the commander of a combat tracker platoon, each of our four 5-man teams employed a labrador tracking dog. Of the six dogs who were in my platoon over the course of 1969, two were KIA and all the rest were wounded at least once (some more than once, while serving with the US Army and the British SAS in Borneo earlier) Unfortunately, none of them ever reached “retirement.” The Army euthanized the survivors in 1972 rather than returning them to the U.S. 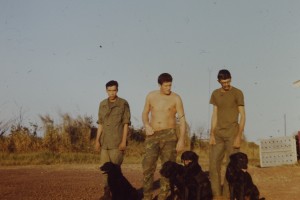 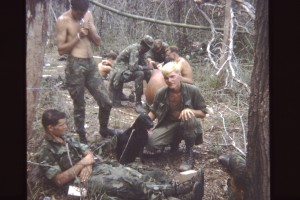 They were the best dogs on earth and saved my life more than once, they saved countless 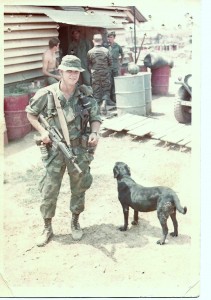 lives of soldiers in the units we supported.  I promised myself that when I was able to have another lab, he would never know fear, hunger or pain and be able to do all of the “dog” things that my guys never got to enjoy.  I have lived up to that promise and Brutus is, I hope, the most spoiled dog in the world.  He enjoys not only dock diving, but especially body surfing on the beach, hunting, swimming in the general, riding in our Baja bug on off-road adventures (except when he tries to climb into my lap while making steep descents) and running around with his dog buddies.  He is my constant companion and my redemption.

Thank you for sharing both Brutus’s stories and for yours and Brutus’s service in the Army. I know that your current Brutus is living life to the fullest and can feel all the love you share with him……..Cera