We got Fiona as a rescue in 2006. She was around 1.5 years old. Fiona is a energetic happy dog that loves going for walks, hiking, and going to the beach.

During the fall of 2007, we began noticing that Fiona didn’t have as much stamina while on the daily walks around the neighborhood or on hikes. Fiona had surgery to repair her ACL earlier that year and the vet attributed her lack of stamina to her knee not being completely healed. A few months later at the beginning of 2008, Fiona had another surgery to repair her ACL in her other knee. 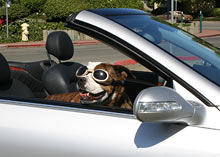 A few months after the second knee surgery, while on a beach trip, we noticed that Fiona wasn’t enjoying herself as much as usual. We thought her knees were bothering her and we had her checked by her vet when we returned home. She had gained some weight during her recuperation from the second knee surgery so the vet thought her lack of enthusiasm was the result of a combination of her weight gain and her knee surgeries and suggested we put her on a diet and prescribed Slentrol, an appetite suppressant for dogs.

Over the summer, Fiona continued becoming more lethargic and had a marked decrease in stamina. We were becoming more concerned as the months wore on. On some days while on the daily walk she would lie down in someone’s front yard and would refuse to get up. My husband would get the car to bring her home even though we were only a few houses from home. We took her to the vet several times during the spring, summer and early fall. At one point, we insisted that Fiona have an ultrasound to check her heart because we were sure that she had a heart condition based on her lack of stamina. Her heart and lungs were normal and blood tests didn’t reveal any abnormalities.

The summer was marked by periods where Fiona was euphoric and puppy like and other times where she looked and acted extremely depressed. During the times when she was exuberant, she would jump up and nip our German Shepherd in the face while yipping like a puppy. This was unusual behavior for Fiona and I began to research whether anyone else had reported mood swings while on Slentrol.

In Oct., it was becoming apparent that something was seriously wrong with Fiona. She panted almost every waking moment, she slept a great deal of the time, and she barely had enough energy to walk around the block. One night, one of her rear legs buckled under her and we thought her knees were bothering her. We took her to the vet again on Oct. 11, 2008 and the vet took blood samples from her and once again, the results were “normal”. Later we learned that the buckling of her legs was a neurological symptom. On Oct 13th, Fiona refused food, had an alarming lack of awareness of things going on around her, and was restlessly pacing when she wasn’t sleeping which was most of the time. I took her to UCD and she collapsed in the parking lot. I knew then that something was seriously wrong with Fiona. An exam that included an MRI at UCD, revealed a 2 cm mass near the center of her brain. I was shown the MRI and I could see how large the tumor was and how much damage had occured to her thalamus.

The neurologist thought that the mass was likely cancerous but could be a fungal or bacterial infection. We requested a biopsy so we would know for certain if Fiona had an infection or cancer. The biopsy results revealed that Fiona had cancer and that there were two types of cancer cells present: astrocytoma and oligodendroglioma. We were devastated. We were told surgery wasn’t a viable option because the tumor was very large and wrapped around her brain stem and chemo wasn’t an option because of the possibility of the drugs getting into her brain stem which would be fatal. We thought we were left with no options for a very serious condition. 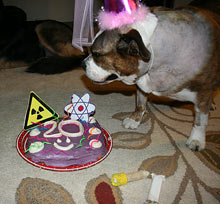 Fiona was prescribed prednisone which decreased the swelling in her brain and seemed to improve her awareness. A few days after the diagnosis, Fiona began to have major seizures. It was frightening and heartbreaking to see my happy go lucky girl in such distress. Fiona was prescibed phenobarbital which really helped decreased the number and severity of seizures.

After Fiona had been on steroids and phenobarbital for about a week, we saw major improvement in her balance and cognition. She wasn’t stumbling and falling as frequently. She was looking so much better that we took her to a dog beach where she ran and played in the water and looked very much like her old self. The day after the beach trip, we had an appointment to see a radiation oncologist, Dr. Theone, at UCD. I showed Dr. Theone a video of how vacant Fiona was on the day of diagnosis and a video of Fiona running at the beach the day before the appointment. Dr. Theone thought that Fiona may benefit from radiation treatments based on seeing the two dramatically different videos which indicated that once prednisone caused some of the swelling in her brain to subside, there was some free space that the tumor had not yet invaded.

Dr. Theone thought after 20 radiation treatments, Fiona could have sixteen weeks of quality life. We jumped at the chance to give her more quality time. We had gone to the appointment with Dr. Theone thinking we were just verifying that the very last treatment option was not going to work for Fiona. Instead we were elated. Dr. Theone cautioned us that while astrocytoma was responsive to radiation the oligodendroglioma was not. We were told the risks of daily sedation in a dog that had existing brain damage. We scheduled Fiona for the radiation treatments hoping for the best. We were afraid that we were going to cause her to suffer more.

Fiona began radiation treatments on Nov. 19, 2008. When I picked Fiona up after the first radiation treatment, I expected to see a very sick dog. What I saw was a dog walking out under her own on power that was ready to eat dinner. I was relieved. Over the course of the next five weeks, my husband made the 90 mile round trip to drop Fiona off every morning and I made the trip each night after work to pick her up. I would bring her dinner with me and every night, we had a picnic in the parking lot of UCD. She never once failed to clean her plate during the five weeks.

The five weeks passed quickly and we could see steady improvement after each week. Fiona began completing the daily walks without having to take breaks and for the most part, kept up a brisk pace. She began to get interested in toys and playing with our other two dogs. On Dec. 19, 2008, Fiona had her 20th treatment. We had a party at home to celebrate. In January, Fiona had her first post-radiation checkup with Dr. Kent and he said her neuro exam went well and decreased her prednisone dosage by 50%. Last week, on Feb.8th, Fiona had her second post-radiation treatment and again Dr. Kent said she was continuing to do well and decreased her prednisone dosage again.

We are grateful for this extra quality time with Fiona. It was very apparent when she was first diagnosed that she wasn’t going to live much longer and we were certain we were in for a sad time during the Holidays. Instead, we had very happy Holidays with Fiona and the other two dogs eager to see what new toys and treats waited for them under the tree on Christmas morning.

Fiona has had some behavioral and personality changes as a result of brain cancer but she is alive and a happy dog because of radiation treatment. We joke about the differences of “Old Fiona” vs. “New Fiona” but she is happy and that’s all that matters to us.

Our annual dog beach trip to Mendocino is coming up in May and Dr. Kent jokingly suggested that we schedule her MRI for after the beach trip so Fiona wouldn’t be emabarrassed on the dog beach with a shaved head. We were happy to hear that Dr. Kent thinks Fiona will be going on a beach trip in three months.