Short story about my girl : Hooker 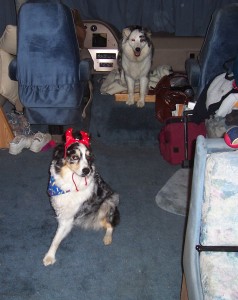 Hooker, more formally known as Vaquero’s Workin Girl, ASCA/AKC Cd, ASCA CDX, HIAs, HSAsd, OTDsd, is a true miracle. She completed her ASCA Open Trial Dog, ducks, title 2006, on three legs, with a HIT duck score. In 2006, I received her certificates of accomplishment from the AKC Aussie club (USASA)- for being number two in the nation in 2004 in both Intermediate sheep and started ducks. That same year, we qualified number 8 in the ASCA obedience Finals standings in Open. She was diagnosed with Osteosarcoma in her right foreleg in July of 2005, had it amputated late that month, and she was chasing her ball and herding by the end of August. We hope to go on and try for more ASCA herding titles, or at least compete. She is not happy when not “Workin”!! My Hooker, the love of my life!, came into my life after 18 long months of waiting for the right lady for her father – then I chose her at 2 weeks – I know!! But it has been the right choice for us both – my stubborn little blue girl, never a lady, but always ready for everything!

Hooker is my reason for investigating canine massage.  Early in our obedience career, I found that she was much more focused on our partnership if I spent 15 or so minutes doing body work.  I’d sit on the floor and she would sit in my lap with her back to me.  I now know I was using effleurage and kneading to loosen her muscles, I did know the proper stretches to use.  We just did what felt right to us.  After the body work, we went for a potty walk, then did some obedience warm up, then just sat together while we waited our turn in the ring.  About half way through the individual work of the dog before us, we’d do some more warm up work, then breeze into the ring and have a ball.  She absolutely knew where the judge was, and always played to the house, but Hooker was a phenomenal competitor.  Her diagnosis in 2005 brought my world crashing down, I just could not imagine it without her in it.  We elected to amputate the leg, and were astounded at how little pain she showed (OK, almost none) given the extent of the tumor.  That first 30 days after surgery were horrible, I kept feeling that I had made a selfish decision that she was now paying for in pain and depression.  We started acupuncture, which helped mitigate the pain and seemed to influence healing.  The surgeon was surprised by how fast she had healed when he removed the sutures.  A friend’s wife had been through breast cancer at about the beginning of Hooker’s ordeal.  Jean-Claude had done massage on his wife’s surgical site, beginning soon after surgery.  She has returned to almost full use of her arm and little to no need for compression, few adhesions, amazing after a full mastectomy.  He showed me how to work on a suture line to aid in healing and regain function.  Hooker has had both that work and regular massage to alleviate compensatory problems since 2 weeks post surgery.  From the day of surgery, I worked on her back and hindquarters.  It was because of how much it helped her and how it seemed that it would benefit others, that I looked into massage in 2007.  Not until meeting Noel Ritter (who did massage Hooker) at our ASCA National Specialty in Las Vegas in 2008, did I find the NWSAM and enroll.  Hmm, Hooker’s summary is turning into a bio for me.  We are that closely entwined, though.

A follow up on my Hooker – after all is said and done, I would amputate a dog’s leg to save a life in a heartbeat.  Despite the diagnosis of atypical osteosarcoma, and a guarded prognosis of 6 to 12 months, we had 5 and a half fabulous years more.  The last month was sort of hard, since her eyes still said I’m a very wonderful dog, and very alive, but her body was not working for her.  The osteo came back, as predicted, but not in her liver or lungs.  I think I am grateful for that, it would have been horrible to watch her fail through liver failure, or cough her way to the end.  But, watching her try to compensate on two legs was pretty tough, too.  A funny part – she had such a huge fan club in the obedience world, people would see her and ask if she could have this treat or that one.  At first, I would say 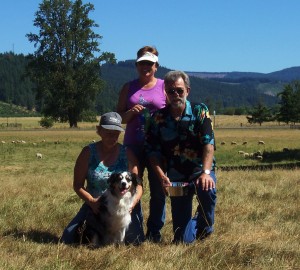 she can have anything that she wants, (hey, anyone can live with a monstrously spoiled dog for a year, right? – well, I certainly could!) but then I started curtailing them, she so outlived her prognosis and we needed to keep her weight in check for her remaining legs.  She’d pout!  But a cuddle made her world right, and applause when she did stuff in a ring just made her day.  I said a very tearful good bye to my heart dog on August 15, 2010.  She lives on forever in my heart.