Posted on August 7, 2013 by chase
Ivan the Terrible was a husky lab mix, best we could determine.

We adopted him from the Greenville Humane Society when he was just a tiny puppy.  My husband selected him because he was sitting smack in the middle of his food bowl, daring his siblings to even try.  His first few months, he tried to be grumpy but we showered him with love.  Thus the Terrible in his name.  However, he grew into the best dog ever.  He had a since of humor and loved to play games, his games.   One morning after I followed my usual practice of giving all our dogs a treat as I walked out, he gave a big woof before I got my key out of the lock.  Understandably I jumped.  He thought that was great fun and afterwards would often rush to finish his treat before I locked the door.  Whenever he won he gave a big woof.  Being ready for his game,  I just laughed which he loved even more.  On a regular basis, the same game.
Ivan also loved to watch things in the sky.   The first time I noticed, he was on our deck and every few seconds he would raise up on his back feet and bark.  Then stop, quietly waiting, then bark.  I went over to check it out and saw hawk was circling over our neighbors house.  As it went out of sight, we waited.  When it circled around back overheard, bark and jump.  As it went over the roof, quiet, then as the hawk soared around, jump and bark.  Again he made me laugh.  And I have to say he successfully chased ever airplane away.  Due to his fierce barking and carrying on when one flew over, a plane never landed in our yard while we had Ivan.
Ivan’s buddy was Alexander the Great.  He was a collie Shepherd mix, also from the pound, and a sweet good natured boy.   When Ivan was about 10 and Alex was 11, we lost Alex to transitional cell carcinoma of the bladder.  It was inoperable and basically untreatable and we lost him very quickly.   One morning I went to get treats for everyone as I was leaving, and got one too many.  I learned over, letting my head hit the counter top and cried….until I heard a noise behind me.  There was my big boy, butt in the air with a huge grin on his face.  He gave me a woof.  I laughed thru my tears.
Then one day Ivan got a nose bleed.After a month of tests, we discovered he had nasal 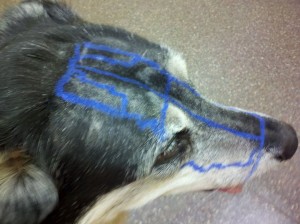 cancer.  Our local specialty vets are great and initially the cancer was still contained in one side of his sinus cavity.  We began palliative care, including radiation treatment to shrink or stunt the growth of the tumor.  Two rounds gave us an extra 10 months with Ivan.  I will never trade that time.  And he was such a brave boy.  Always well mannered at the doctor, even standing the humiliation of being weighed on a regular basis.  lol    He was free with kisses and still always the clown.   And his love of food, as established the day we met, never waivered.
I miss my Ivan terribly.  He was an inspiration with his continued love and sense of humor through the numerous treatments.  I know his cancer, as it progressed, had to be very uncomfortable, if not painful.  And although we could not tell him the regular visits to the vet were to help him, his trust in us must have made it clear to him that we were helping.  He was a trooper.  I can only hope that I will maintain such trust and love in my life.  It would an honor to his memory if he could be selected.
Janis Richardson Hall 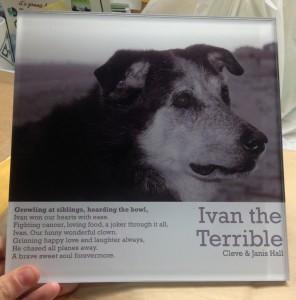 Thank you Janis for sharing Ivan with Chase away, sadly Nasal cancer is also what took Chase from our side too. I’m so happy to know you had 10 extra months with treatment to enjoy Ivan I know you made the most of each and every day.
((Hugs)) ……. Cera
« Hooker | IZZO »