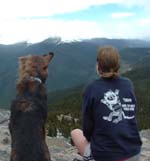 Since fewer and fewer veterinarians are opting to focus their careers on research it has become vital to support the role of the clinician scientist as they search for landmark discoveries and help shape the practice of veterinary medicine.

Thanks to the generous support of donors, Chase Away K9 Cancer is funding the second year of the Fellowship of Dr. Jennifer Ginn, DACVIM (Small Animal Internal Medicine) at the University of Wisconsin-Madison.

Dr. Ginn continues, “I would like to thank all of the generous donors who have helped to fund this research. Behind all of the critical achievements in research that have moved us forward in our understanding of cancer is the funding that made it possible. Your support is crucial to the progress we are making to fight cancer in veterinary medicine, and I cannot thank you enough for this support.”