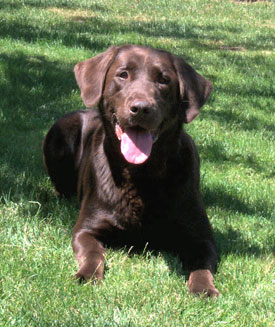 We said good-bye to Buck when he was a month shy of 10 years old. Four months prior to 12/3/05 we had his front right leg and shoulder amputated due to osteosarcoma.

It started out as a limp and it took a month before a cancer diagnosis was known. That call set me on a mission to save our big brown boy. Unfortunately, everywhere I turned the news was not good. But I thought maybe we might just be an exception to the rule. I certainly was going to give it my best. We decided not to do chemo and or radiation as the prognosis wouldn’t really improve and his quality of life was more important. I fixed him special meals every day for 4 months in hopes of fighting off any residual or new cancer cells. But in October his left front leg showed signs that something was wrong. I just didn’t want to believe it was cancer. I had hoped it might just be the extra strain the left leg had to endure to support his body and that we could manage it. Nope, the cancer had jumped to the other leg. We were told this was very rare. Scott was ready to let Buck go before I was but he let me process what lay ahead and on the morning of December 2nd as I left for work, I told Scott I was ready. 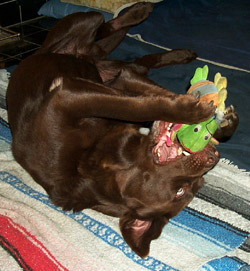 Buck joined our family in a backwards kind of way. His mother, our precious Bodacious gave birth to 8 puppies. Buck was number 1 and he decided he was coming out feet first. Scott helped Bo deliver Buck and the others that followed. We have so many fond memories of Buck and Bo. We spent many summers up at Priest Lake, Idaho. It was a Labradors paradise.

After Buck, came Jack and the Summer of 2006 we were once again at Priest Lake. Jack took a leap off the boat dock which led me to find a Dockdog club when we got back home. I found Cascade Dockdogs and Cera was the current Secretary of the club. She had just started Chase Away K9 Cancer a few months before. We had found a way to fight back and in some small way we think Buck had something to do with Jack taking that leap into the Lake and leading us to Chase Away. We fight in Buck’s memory and will continue until we win! 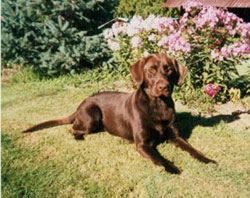 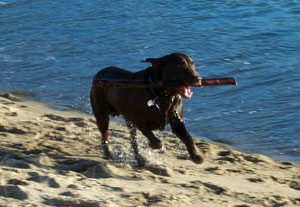